LAKELAND, GEORGIA – Lanier County Supervisor of Elections Josh Black confirmed that the Lanier County Board of Elections will follow the direction of the Georgia State Board of Elections. “All voting for the March 24th Election has been merged with the May 19th election due to COVID-19 concerns.  You may still request an absentee by mail ballot if you have health concerns,” stated Black.
Black has posted a sign on the local election board office and voting area which affirms his statement.

In light of the public health emergency posed by COVID-19, the illness caused by the coronavirus, in-person voting presents increased risk to voters and poll workers.  Governor Kemp has declared a public health emergency.  President Trump has declared a national emergency, said Secretary of State Brad Raffensperger. “Events are moving rapidly and my highest priority is protecting the health of our poll workers, their families, and the community at large.”

Speaker of the Georgia House of Representatives David Ralston agreed.

“I support Secretary Raffensperger’s decision to delay the presidential preference primary and other March elections until May,” he said. “This will ensure an orderly and safe elections process and is in the best interest of Georgia’s citizens.”

The Democratic Party of Georgia is also in accordance.

“Our priority is to protect the health and safety of all Georgians and to ensure that as many Georgians as possible have an opportunity to vote,” said State Senator Nikema Williams, the Chairwoman of the Democratic Party of Georgia.  “Continued in-person voting could compromise both goals.  Georgians who have already cast their vote in person or by mail for the March 24 primary will be able to vote again in the May 19 primary for the elections already scheduled for that date.  If Georgians who have already cast their vote for the March 24 primary do not vote again in the May 19 primary, their votes for the presidential preference primary will still count.”

Secretary Raffensperger has represented that all votes already cast in person and all absentee ballots will be counted and every Georgia voter that has not yet had a chance to cast a ballot in the March 24 elections will be able to do so on May 19, along with the elections already scheduled for that date.”

“Given these circumstances, I believe it is necessary and prudent to suspend in-person voting in the Presidential Preference Primary, and the local elections associated with them, and resume in-person voting for those elections as part of the already scheduled May 19 General Primary.”

The CDC recommends those, including seniors, who are at greater risk from COVID-19 limit their exposure to the virus by keeping space between themselves and others, avoiding crowds, and staying at home during outbreaks in their community. Dr. Anthony Fauci, the head of the National Institute of Allergy and Infectious Diseases, has likewise identified individuals 65-years-old and older as facing increased risk from COVID-19. He explained that older Americans infected with COVID-19 stand a greater risk of serious difficulty and even death from the virus.  All individuals should practice social distancing and minimize contact with others to minimize the risk to them and others.

With this decision, Secretary Raffensperger looks to confront the public health threat to our state, and the health of Georgians, while also maintaining an avenue for the people of Georgia to exercise their fundamental democratic right to vote. In the midst of a public health emergency like the one facing our state, taking strong action to protect all Georgians, including its dedicated poll workers, is paramount. 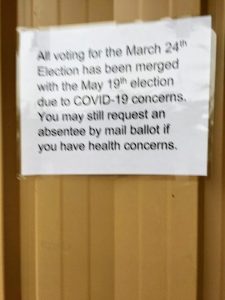