VALDOSTA, GA — The Valdosta State University Concert Band and Wind Ensemble will perform at 7:30 p.m. on Thursday, Feb. 18, in Whitehead Auditorium. Admission is free of charge and open to the public.

The 45-member Concert Band, conducted by Skye Holmes, will kick off the evening with Gustav Holst’s uplifting Mooreside March. Guests will appreciate the music’s “splendid sense of purpose and direction, from the bold fanfare-like opening … right through to the exultant flourish in the final bars …,” according to program notes.

The Concert Band will then perform Andrew Boysen’s Song for Lyndsay, an expansion of a short, unnamed piano piece he wrote for his wife. The composer described the music as “a very personal work … more than anything else a simple love song dedicated to Lyndsay and what she has meant to my life.”

The Concert Band’s final performance of the evening will be Michael Daugherty’s Alligator Alley, a tribute to the East-West stretch of Interstate 75 between Naples and Fort Lauderdale that passes through Everglades National Park in Florida. “This park is home to many endangered species, one of them being the American alligator,” according to program notes. “One might see an alligator along the roadside when driving on this stretch of road.”

Gloriosa is inspired by the songs of the Kakure-Kirishitan (Crypto-Christians) of Kyushu, Japan, who continued to practice their faith surreptitiously after the ban of Christianity, which had been introduced to that southern region in the mid-16th century by Roman Catholic missionary Francisco Xavier, according to program notes. The worship brought with it a variety of western music.

Though Christianity was proscribed in 1612 by authority of the Tokugawa Shogunate in Edo (today Tokyo), Kakure-Kirishitan continued advocating sermons and disguised songs. Melodies and lyrics were required to be “Japanized.” This adaptation of liturgy for survival inspired Ito to write this piece in order to reveal and solve this unique cultural mystery.

“Nagasaki district in Kyushu region continued to accept foreign culture even during the seclusion period, as Japan’s only window to the outer world,” the composer said. “After the proscription of Christianity, the faith was preserved and handed down in secret in the Nagasaki and Shimabara areas of Kyushu region. My interest was piqued by the way in which the Latin words of Gregorian chants were gradually ‘Japanized’ during the 200 years of hidden practice of the Christian faith. That music forms the basis of Gloriosa.”

Holmes is assistant director of bands and director of athletic bands at VSU. She directs the Blazin’ Brigade Marching Band and Concert Band and teaches courses in arranging and marching band techniques.

Harper is director of bands and assistant professor of music at VSU. He conducts the Wind Ensemble, directs the graduate program in wind conducting, and guides all aspects of the university band program.

VSU’s Whitehead Auditiorium is located on the first floor of the Fine Arts Building, at the intersection of Brookwood Drive and Patterson Street. 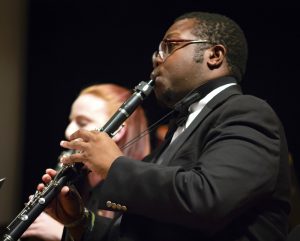