2020 has certainty been a year of years. I do not need to recount the events of this year; we all know them too well. It is just strange to think that it was less than a year ago since we impeached the president, yet it seems more like a decade. As we think back over the events of the past 12 months, it may be helpful to know that 2020 is not unique. We have had other years in which we did not know if we would survive, especially years in the middle of wars. Yet we always did. One year in particular has come to my mind. As crazy as 2020 was, 1919 gave it a run for its money, and, like always, we endured and overcame.

The biggest problem in both years was the same, a nationwide pandemic. Though the outfits we wore looked completely different, one style was the same: facemasks. 1919 was not the worst year for the Spanish Flu but it did see a deadly third wave that caused businesses to close and social activities to end. If anything, technology has made 2020 easier than 2019. Going online was not an option then.

As with 2020, the biggest consequence of the pandemic was the death toll, but it also was a massive hit to the economy. Families had the same concerns of watching businesses collapse. Yet in 1919 they had the added burden of the effects of the de-escalation of WWI. As crazy as this sounds, WWI was good for our economy. During the war, we fed the world while most of the men were fighting. When the soldiers all returned to their own nations, American farmers took a hit.

At the same time, the economy was suffering from major labor issues. With the 1917 Bolshevik Revolution, all labor strikes now looked like communist revolutions, throwing the nation into a “Red Scare.” Dozens of major strikes and riots occurred in cities, ending in the November Centralia Massacre that left six dead. In April and May, bombs mailed to important business leaders and politicians, killing two. The government’s answer was the J. Mitchell Palmer raids, where more than 300 suspects were either arrested or deported. All the labor unrest hurt the stock market. In many ways 1919 was harder on the economy than 2020 has been.

This past year has seen what seems like an unprecedented number of natural disasters, yet 1919 had its own share. In July a coal mine collapsed in West Virginia, trapping 221 men and capturing the nation’s attention. None were expected to make it out alive but, in the end, only six perished. Two months later in Corpus Christi, Texas, one of the largest hurricanes to hit the area came ashore and killed 700 people. 2020 may have had more disasters, but in terms of loss of life it did not beat 1919.

It’s hard to top an impeachment and the contested election of 2020, but 1919 did have issues. President Wilson was in the biggest fight of his life with Congress, which refused to ratify the Treaty of Versailles and join the League of Nations. Instead of working with Congress, Wilson stubbornly insisted it step in line and began a whistle stop tour of the nation to convince the American people to support his cause. In the end, he did not get the support he wanted and instead suffered a debilitating stroke, leaving him unable to function as the president and leaving the U.S. leaderless.

For many, dealing with these issues and quarantine would have been easier with sports. It seemed bad enough when 2020 started with the Houston Astros’ cheating scandal, but then in March, right before an Oklahoma City Thunder game, sports was canceled. Sports may not have shut down in 1919, but it had an even worse sports scandal. In October eight players on the Chicago White Sox were found to have accepted money to lose the World Series. Americans were crushed. With the sanctity of baseball now questioned, what, if anything, was sacred? Then that same year the Red Sox traded pitcher Babe Ruth to the Yankees, beginning the curse of the Bambino which lasted for 86 years. Sports has come back for us in 2020, but the Black Socks scandal took some time to get over.

Finally, to really understand how hard 1919 was, in October of that year Congress passed the Volstead Act outlawing alcohol. I myself am not a drinker, but from close friends it sounds like alcohol may have been 2020’s only saving grace. Whereas 1919 outlawed drinking, in 2020 we deemed it an essential business and even created home delivery. I guess for some at least, 2020 may have been better than 1919. I am just glad I will not be around for 2121.

Dr. James Finck is a Professor of History at the University of Science and Arts of Oklahoma and Chair of the Oklahoma Civil War Symposium. To receive daily historical posts, follow Historically Speaking at Historicallyspeaking.blog or on Facebook.

Dr. James Finck is an Associate Professor of History at the University of Science and Arts of Oklahoma in Chickasha. He is Chair of the Oklahoma Civil War Symposium. Follow Historically Speaking at www.Historicallyspeaking.blog. 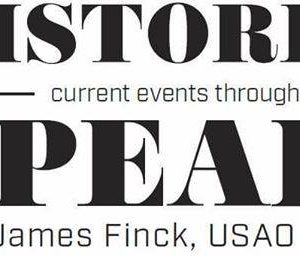 fresh kwaks from the pen of Delbert Duck

What is the key to accelerating finding the Cure for COVID-19?