LAKELAND, Georgia – Remembering an amazing legacy of service and friendship, New Bryant Missionary Baptist Church is commemorating 151 years on Sunday, November 8th.  Members of the congregation will hold “Anniversary Sunday Celebration” at 9:00 a.m. outside of the church located at 76 E. Mill St., Lakeland in a kind of drive-up car service.

New Bryant Missionary Baptist Church, was established in 1869.  This fact alone calls for recognition and reflection on the heritage of this church – its history and the members of the congregation. Last year, New Bryant Church members celebrated their church’s 150th anniversary on the 2nd second Sunday in October.  October is the more historically correct time of year for the celebration.

New Bryant Missionary Church and its foresighted membership have always been a part of Lakeland’s religious, educational, and political leadership.

Since the coronavirus concerns became a part of everyone’s daily life, New Bryant Missionary Baptist Church has provided conference calls and drive-up services at the church.  On the 4th and 5th (if there is a 5th) Sunday of every month, Pastor Sirmans leads worshipers out in the open with people sitting in their cars as they listen to his inspired word.  Phone inquiries can be made to: 229-482-3806.

Known throughout Lakeland and Lanier County, New Bryant Missionary Baptist Church is revered for its dedicated service to our community and its role in citizens accepting Christ as their Savior and dedicating themselves to the Christian way of life. 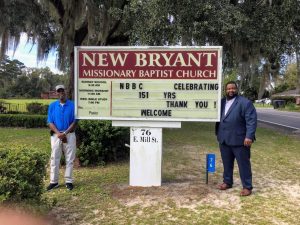