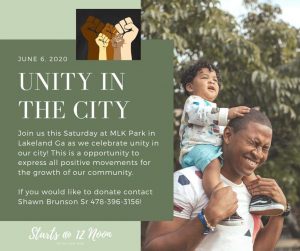 By Carol A Gasser Moore

LAKELAND, GEORGIA – The idea started out as a civil rights demonstration in Lakeland, Georgia. Former Lanier County schools assistant coach and bus driver Shaun Brunson Sr approach the Lakeland Police Department about arranging a demonstration in Lakeland. When Sheriff Nick Norton heard about it, he asked Shaun to drop by his office. After a short discussion in an offer by Norton to help, the two men agreed two mutually help each other with a cookout. The event is deemed Unity in the City.

According to Shaun Brunson Srs Facebook post, “Celebration of unity in Lakeland Ga! If you don’t try to build together you never will! Had a good talk with the Chief of Police and Sheriff, they are both in full support of the continued unity in our city! Unity Peace Rally June 6th MLK Park‼️✊🏾”

Unity in the City is an event which is accepting donations and is free. It is one man’s response to the national protest relating to George Floyd’s death at the hands of Minneapolis police officer.