ALBANY, GEORGIA – Through Governor Brian P Kemp and the Georgia Coronavirus Task Force, Georgia has committed roughly $72 million for a project to deploy four temporary medical units for eighty-eight hospital beds and expanded capacity at two reopened healthcare facilities for 208 beds, including $12 million for additional medical staff at Phoebe Putney Memorial Hospital in Albany. This is preparation for a possible COVID-19 patient surge.

“These projects have been underway for several weeks based on modeling and epidemiological recommendations, and we are following leads on several more proposals to expand healthcare capacity as we prepare for patient surge later this month,” said Governor Kemp. “At every stage of decision-making, our team is consulting with public health and emergency management experts in the private and public sectors. Together, we are working around the clock to prepare for future needs in our fight against the spread of COVID-19 in Georgia. In the days ahead, we will finalize additional projects to expand our capacity and get critically needed resources to frontline medical providers.” 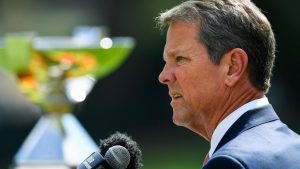