WASHINGTON D.C. – Rep. Bill Huizenga plans to introduce a bill that would allow for a three-month tax holiday modeled after tax relief for active military

As lawmakers prepare a fourth round of stimulus relief in response to the coronavirus pandemic, a Michigan lawmaker plans to introduce a bill this week calling for a federal income tax holiday for doctors, nurses and first responders.

Rep. Bill Huizenga, a Zeeland Republican, said the proposed tax holiday for three months is modeled after how the federal government excludes income taxes from members of the military serving on the front lines in combat zones.

It’s targeted at first responders like police, firefighters, paramedics and emergency medical technicians. The holiday also would cover hospital staffers such as nurses, doctors, physicians assistants and nurse practitioners who work in a county with at least one case of COVID-19 or are providing direct services to COVID patients in a hospital.

“If we’re viewing this as sort of a war-like footing, then let’s try to treat it that way,” Huizenga said.

The tax holiday would apply to income up to $150,000 annually. The legislation allows the Treasury secretary to extend the income tax holiday for three more months if the coronavirus crisis continues.

In talking with a business owner in his district, Huizenga said he wanted to find a way to financially reward workers who are deemed essential personnel who continue to work when the rest of society has retreated to their homes to safeguard the public health.

He said his proposal wouldn’t cost private employers additional money, though they may still choose to do what Huizenga has dubbed the “patriot bonus” for showing up to work and serving amid a national crisis.

“This is the federal government saying, ‘Thanks.’We recognize what you’re doing in voluntarily putting yourself in harm’s way, so we’re lifting this income tax burden for a three-month period,'” Huizenga said.

Democratic Rep. Dan Kildee, a member of the tax-writing Ways and Means Committee and House Budget Committee, is open to the idea of targeted support for front-line workers, including health care workers, but hasn’t reviewed Huizenga’s bill, according to an aide.

Kildee of Flint Township previously raised the issue of additional targeted relief with his Democratic colleagues.

“We owe our deepest gratitude to the doctors, nurses and first responders on the front lines of the coronavirus outbreak,” Kildee said.

“As Congress considers additional emergency relief bills, I believe that we must find additional ways to support our front-line workers who are essential to maintaining the basic needs of Michiganders during this crisis.”

Congress is formulating what will go into its fourth legislative installment in response to the novel coronavirus pandemic, which has sickened 163,539 nationally and caused 2,860 deaths.

Michigan has 7,615 confirmed cases of COVID-19, the disease caused by the coronavirus, and 259 known deaths as of Tuesday. The state has the fourth most cases of any U.S. state behind New York, New Jersey and California.

Lawmakers in Washington are looking for ways to get money directly to individuals and families, which led House Speaker Nancy Pelosi, D-California, to float Monday the possibility of removing the $10,000 cap on state and local tax deductions retroactively for two years. Congressional Republicans included the cap in their 2017 tax reform package.

But Republican Sen. Chuck Grassley of Iowa, who chairs the tax-writing Senate Finance Committee, shot down the prospect, calling it a “nonstarter” because it largely benefits high-income earners in states with relatively high tax rates.

“Millionaires don’t need a new tax break as the federal government spends trillions of dollars to fight a pandemic,” a Grassley spokesman said. 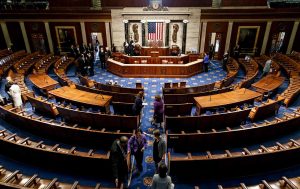