LAKELAND, GEORGIA – A fire at the Old Butcher Shop Plaza broke out Sunday afternoon between 3:00-4:00pm. The businesses at the plaza include the Old Butcher Shop, the Lakeland Probation (Department of Corrections, DCS) Office and Smith Family Chiropractic Center.

The plaza is located at the intersection of North Brantley Street and East Church Street, specifically 6 N. Brantley St. It is immediately west of Scout Hall and Connell Cabinets.

Since 2001, the entire plaza is owned by the Old Butcher Shop [Bobby Courson B Eta].  It was insured by Shaw Insurance Company and the building, not including contents, was valued at $244,000.

It is confirmed that the building is a loss and definitely looked the part on Monday by light of day, as it continued to burn internally.  All damage was contained to the building.

“Unless the state (DCS) agency involved requests the Georgia State Fire Marshall is requested to investigate,” said Yeomans, “the fire’s source is unlikely to be investigated further.  There was no evidence of foul play.  The building did not have a fire wall, although there was a brick wall between the three offices since the original building had brick sides.”

Yeomans reported his investigation and conclusions to the State Fire Marshall, who will make his report from Yeomans investigation of the fire and observations as the fire engulfed the building.

This a developing story.

Part of the event was live-streamed on the Lanier County News Facebook page and is available  to viewers. 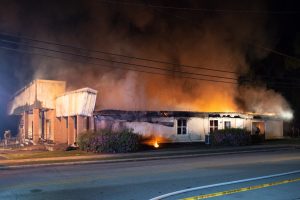