LAKELAND, GA – Tuesday, February 11th brought an “emergency” called election board meeting at the new location for the Lanier County Board of Elections, 162 W. Thigpen Ave., Suite C (Also Known As Annex).  A special emergency meeting is one in which special circumstances do not allow for 24 or more hours’ notice for the public meeting.

Present were Ryan Tuten, Amy Griffin, Josh Black, Anthony Gutierrez and Gene Sellers.  While this was a special called meeting, the board did review and approve minutes for their January 14th regular monthly meeting and a January 23rd Special Called Meeting.

The first important change for this meeting was visual and physical.  Gone were the cramped surroundings that barely had enough room for standard seating of the board and its staff!  There was leg room and walk room as the group came together for the meeting!  In the past, if too many attended a meeting, they would have had to sit in the hallway and lean into the doorway in order to listen to the Lanier Board of Elections meetings.

Elections Supervisor Josh Black reported on the election board changes.  He addressed information about existing poll workers, several who have applied as well as the need to locate, train and approve some additional poll workers.  An update about the Lanier Board of Elections equipment was provided and a list of upcoming election dates for 2020 into January 2021.

A large part of Black’s presentation was about our local area’s geographic information system (GIS).  The GIS is a framework for gathering, managing, and analyzing data. Rooted in the science of geography, GIS integrates many types of data. It analyzes spatial location and organizes layers of information into visualizations using maps and 3D scenes.

The GIS framework is connected to the Lanier Board of Elections’ use of ArcView software suite. ArcView enables the office to view and edit GIS data held in a flat file database and view data held in a relational database management system. As the Lanier County News (LCN) understands it, ArcView software is used for map composition, geographic analysis, and geographic data management.  In the case of the Lanier Board of Elections staff, the use of ArcView allows information from legislative reapportionment, voter maps, the Lanier County Tax Assessor’s office, 911 maps, county commission districts maps, school board district maps, and other areas to be combined and utilized to bring all data current and, certainly, more easily manageable.

“There are about 50 foreseen changes to come from going through the process of entering information into ArcView for our county,” said Black.  “Some changes are minor and some major.  One possible outcome may be to make recommendations to other county offices, such as the Tax Assessor’s office, as a result of this work.  When the 2020 census is complete, it too may provide information that will have to be tabulated into our ArcView data system and be considered.”

“Precinct card polling place changes are planned and will be mailed in the not too distant future,” said Black.

The meeting was adjourned and board members went into an Executive Session.

The Lanier County News would like to inform our readers that there is a new “Research Documents” tab under “News” on its http://laniercountynewsonline.com bar menu.  There, meeting minutes, agenda’s, support documentation, etc. can be found which relate to LCN news stories.  With regard to this story, readers can find “Lanier County Poll Worker Application” and “job descriptions”.  We invite our readers to view this additional information. 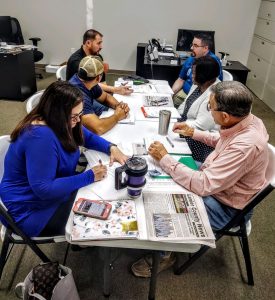