By Carol A. Moore

LANIER COUNTY, GA – As national research proves that parent’s level of concern over school security is at the nation’s highest level in two decades, local citizen and rights advocate Theba Sirmans reported her personal concern to the Lanier County Schools (LCS) Board of Education (BOE).  Instead of a matter about school violence, Sirmans spoke about an alleged verbal abuse and physical deprivation incident between LCMS Coach Will Watson and the LCMS Girls Basketball Team.  Sirmans made her request before the Board of Education (BOE) to investigate an incident involving LCMS Girls Basketball Coach Will Watson and members of the LCMS Girls’ Basketball team which occurred just over a week ago.

Ms. Sirmans was required by the Board of Education (BOE) to be the sole speaker on the subject of the LCMS Girls Basketball problem.  Her written “citizens request to speak” included the words “and parents”, but not by individual name.  Neither BOE Chairman Mitchell Chason nor Superintendent Anita Watson were willing to include comments directly from the team’s parents, who were present.  Sirmans reported that as Watson coached the team during a basketball game, he degraded ‘some’ of the girls by yelling, belittling, name-calling and using put-downs.  She alleged that in particular Watson repeatedly referred to “10” girls, which is the number of African American girls on the team of 12 students.  Among other things Watson is alleged to have said, the coach told these young A-B students they would not graduate from high school.  It was reported that Watson made the statement that they would wind up pregnant and drop-out of school.

Sirmans described the coach as using a “combination of both overt forms of abuse like name-calling and threats as well as covert threats like constantly correcting team members, interrupting them, putting down their ideas and responses, and demeaning them.  She also reported that after Watson allegedly ‘dressed’ out the girls, he required them to do 15 minutes of laps as punishment and withheld water during the activity.

Middle School student Lucy Spikes, who plays on the team, also spoke.  While privately it was made known to the Lanier County News that Spikes, one of the two Caucasian team members, had been hysterical at the time of the incident.  Instead of reporting a problem, she spoke in support of Coach Watson.  Spikes, daughter of Ashley Spikes a clerk employed at LCMS, stated that Watson ‘had’ been harsh, but said the he has made her a ‘better’ player, because he is harsh.  She stated that he shouldn’t have a consequence to his willingness to be harsh.  Spikes implied that Watson’s harsh tactics were outweighed by the fact she’s a good player and her team has had success.

The Lanier County News is well versed in the problems caused by verbal abuse, since this publisher has had a 25-year community education career with the Oklahoma Department of Mental Health and Substance Abuse Services and 13-years of teaching in Georgia public high schools, before becoming the publisher of the Lanier County News.  Nationally, the NAMI (National Alliance for Mental Illness) has stated that “verbal abuse isn’t as clear-cut as other forms of abuse and bullying, it can be hard to identify.”  Regardless, it doesn’t make it any less real and it is known that verbal abuse is a prerequisite for physical abuse.

Questions about Watson’s employment status with Lanier County Schools are also on the rise.  Sometime in the last year, Watson was listed on the LCS roster as a “volunteer” coach.  Will Watson has been a full-time employee of the Lanier County-Lakeland Parks and Recreation Department for about 5 years and its sole park and recreation employee.  The Lanier County News is in the process of making an Open Records request for this information.

The BOE, nor Superintendent Watson made no comment regarding either Sirmans or Spikes’ statements.

This is a developing story.  [Watch for related article from “anonymous” relating to another verbal abuse problem in LCSs.] 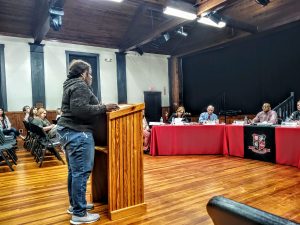 Rights activist and area citizen Theba Sirmans as she addressed the Lanier County School Board. 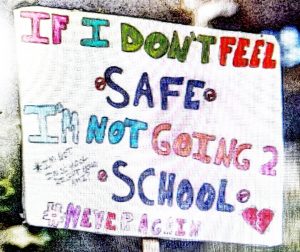 The Lanier County News invites area citizens to pray for everyone involved – the LCMS Girls Basketball Team, its coaches, the BOE and families of the team.