How many fathers and sons earned the Medal of Honor?

Yes, I am fully aware that everybody reading this column does not celebrate Christmas.  And to all of you who don’t, I wish you the joys of whatever holiday season you celebrate.  Whether it’s Hanukkah, Kwanzaa, Boxing Day, all of the above, none of the above, or something I haven’t yet heard of, I hope it is your most happy and joyous ever.

For those reading this after Christmas, I hope the holiday was as happy as your circumstances will allow it to have been.

My memories of Christmas are many and joyous, considering I have 61 of them behind me now.  The first few I don’t recall, of course, but of those I remember, they’re all good.  From opening gifts with my brother and sister to now, when I see the faces of my grandchildren, I relive all the happy moments every Christmas.

I hope you do too.  And my Christmas gift to all of you, my friends, is another installment of the trivia you’ve come to look for in this space.  Merry Christmas! 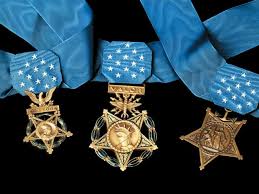 … the CEO of Food For The Poor has a very ironic name?  One of the largest non-governmental organizations in the world, Food For The Poor is led by a man named Robin Mahfood.  (You can’t make this stuff up, folks.)

… horses focus their eyes differently from humans?  Humans use muscles in and around the eye to change its shape in order to focus.  But a horse changes the angle of its head to focus instead.  (Can you imagine a horse wearing eyeglasses?)

… smiling at a dog may not be a very good idea?  According to people who know, dogs interpret smiles as a baring of teeth, which they see as an act of aggression.  (Nice doggie …)

… the “ideal German soldier” of World War II was Werner Goldberg?  Goldberg (1919-2004) was depicted in the Berliner Tageblatt newspaper as the Ideal German Soldier during the rule of the Nazi regime.  Though he was only in the Wehrmacht, or German Army, for a short time, his photograph appeared all over Germany throughout the war as a recruiting device.  Ironically, Goldberg was half Jewish, though he did not know that until long after the war.